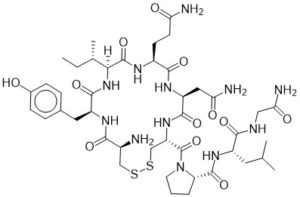 There is truly no molecule more romantic than Oxytocin. Discovered in 1906 by Henry Dale, this small 9 amino acid macrocycle is just about as fragile as the concept of love itself, with a ring closure via a disulfide bond. Oxytocin is a neuropeptide hormone and an established regulator of birth and bonding between an infant and mother, but in recent years more complex behaviors have been attributed to its release in the human brain. Interestingly, this hormone (as well as dopamine) is present in unusually large amounts when a person is experiencing the feeling of falling in love. So much, that the brain can become dependent upon these chemicals, and something as tragic as a sudden break-up can abruptly stop production, leaving the  individual in a state of withdrawal. fMRI scans conducted by Fisher et al of the broken-hearted have been comparable in morphology to opioid and stimulant addicted patients experiencing withdrawal. Love really is a drug.

Because of the chirality and fragility of the compound, total synthesis of the molecule has proven difficult, but was accomplished several times in both solution and solid phase. However, no total synthesis was as beautiful as the isonitrile route designed by Danishefsky et al in 2012. Moreover, the route applied permitted the synthesis of several congeners that displayed improved biological activity. The magic of the isonitrile methodology is the ability to form amide bonds at incredibly mild conditions using a three-component strategy. Here, a thioacid is coupled with an amine through a hindered isonitrile. When I saw this methodology for the first time,  it was the same type of excitement I experienced from Sheehan’s total synthesis of penicillin where DCC was first applied to form the beta-lactam ring. This isonitrile methodology was applied 8 times in total, followed by an oxidation cyclization to afford oxytocin via an elongation strategy.

In order to avoid epimerization of the chiral sites, a native chemical ligation (NCL) approach was employed. This biomimetic strategy is impressive as peptide fragments are coupled without the excessive use of protecting groups, affording the desired product free of epimerization. This is accomplished exceedingly well using Danishefsky’s variation of NCL with an orthomercaptoaryl ester rearrangement (OMER). Albeit racemization at the C terminal of the pentapeptide was noted in a 6:1 ratio.

My fascination with this molecule is boundless, so I appreciate the beauty of this synthetic route and the ingenuity of the Danishefsky laboratory. There’s no shortage of behavioral studies conducted with oxytocin and it’s family of neuropeptides, and it will be interesting to see if this work matures into development of neuropsychiatric therapeutics.